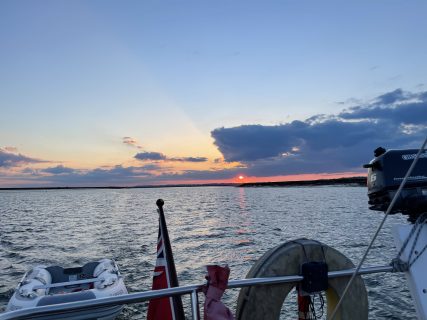 The fleet was split with Flyer & Obsession spending the night at anchor in the River Roach and the rest of the fleet including Kokomo, Ithuna & Lunan deciding to leave North Fambridge at a misty 05.00am on Thursday morning. Unfortunately a few boats decided not to come at the last minute due to the weather prediction. Walton on the Naze was chosen as the first destination dodging the lobster pots as we approached the Walton channel, with an overnight stay Flyer & Obsession deciding to anchor off stone point a nice sandy beach perfect for a beach bbq with the rest of the fleet heading into Titchmash marina heading straight to the club house for liquid refreshments.

The fleet rejoined at lunchtime on Friday where we all headed to Shotley marina. The Walton channel was a bit bumpy with a 20kt head wind but soon flattened out when we reached Flexstowe docks. We reached Shotley marina with perfect timing as the lock was just going into free flow allowing us all to head straight into the marina and on to the visitor pontoon all tied up safely we headed to the Shipwreck Bar & Restaurant which was a hit with some of the fleet not leaving until closing time.

Early Saturday morning there had been some further Fleet movements with Flyer retuning to North Fambridge due to work commitments and Lunan skippers Jenny & Jason being picked up and heading to an 80th birthday party leaving former owner Tim (RC) and Mark to take Lunan to Ipswich Haven Marina where they would rejoin later that night. The rest of the fleet, now only 4 boats, left Shotley Marina at about 11am heading down the River Orwell past the docks and the famous Pin Mill and under the Orwell bridge to Ipswich Haven Marina. All safely through the big lock and into some very tight births Ithuna choosing not to use the allocated birth as it was too small and tieing up on the hammerhead, later finding out that it was the large day trip sight seeing boats berth, they had to make a swift exit to find a new berth.

A few corks were popped and then some of the fleet decided to explore Ipswich town with lots of Jubilee celebrations going on, with live bands & giant tv screens the rest of the fleet headed to the Last Anchor pub for a late seafood lunch.

Amalia due to prior commitments left North Fambridge at 6am on Saturday to join the fleet in Ipswich Haven Marina. With the weather forecast not looking favourable Amalia and her crew braved the conditions to make the journey leaving the River Crouch. They were battered by 34kts winds and 4m seas ending up returning to North Fambridge with all crew safe. Teri later joined the fleet in Ipswich by car.

Later that evening and after a lot of liquid refreshments we all headed into town against the odds, to get a table for 9 in an Indian restaurant. We got lucky and later found out that we found one of the best Indian restaurants in Ipswich, all i can say is it did not disappoint. We all headed back to the marina for an early start the next morning with Teri deciding to join Lunan for the sail back to NFYC and collect her car later.

On Sunday morning grey skies and rain featured as we all cast off and headed for the lock. The rain stopped and a fresh breeze blew from the right direction which was good as Lunan was having some engine cooling issues. We all managed to sail back to North Fambridge, Ithuna playing chicken with a Stena Line ferry as we passed Harwich. The rest of the sail was mostly uneventful with all boats arriving back on the moorings by 16.30 pm. We was very lucky and the rain held off for most of the trip and in fact a lot of sun cream was needed in stead of foul weather gear and was a successful first cruise out of the River Crouch for NFYC in 2022.